The Death Of My Daughter
Print this Tract
These tracts have been laid out for two-sided printing or copying which makes it easy to print, cut, and share your own tracts!
I had a most unusual experience happen to me on December 14, 1981 which I would like to share with you. On that day my wife gave birth to our identical twins. (My wife wanted a home birth) 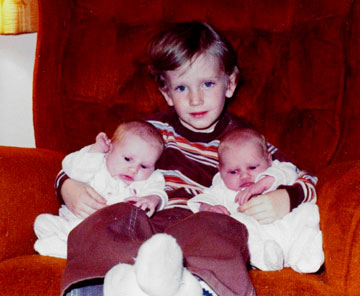 Our son with the twins, 1982
As our firstborn twin daughter was born she was perfect in every way. But our second twin daughter was stillborn as the medical profession would call it. And you know that "stillborn" means "born dead."

I almost hesitate to tell you the rest of the story because it is so unusual and unbelievable even to me. Regardless of what our natural mind tells us, there is a spiritual realm that is unseen to us in this world.

The story I am going to tell you is the truth. 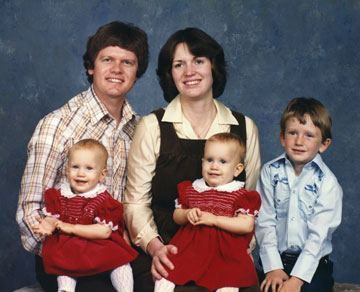 Family photo from 1982
A midwife that had worked at a high risk maternity center in El Paso, Texas tried to revive my second child with all medically known procedures. She eventually gave up. At this point, I had accepted her death, but wanted to hold her. As I reached to pick her up, I was suddenly knocked back and paralyzed momentarily by an evil force. The Bible calls these evil forces, demons. I know this sounds bizarre, but I took authority over this demon in Jesus' Name and commanded it to leave my child. I then began to command life to come into my daughter.

At this point my daughter took a breath and then again ceased to breathe. Again I said, "I command you to leave and life to come into this child in the Name of the Lord Jesus Christ." At that moment my daughter began breathing and this time continued to breathe. 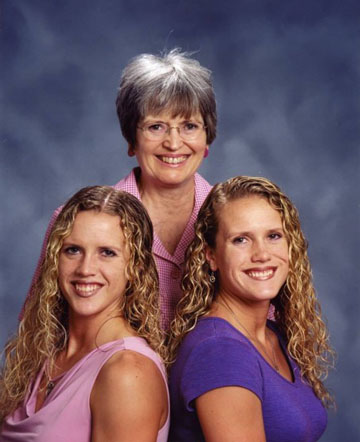 Daughters with their mother in 2005
I actually had a tape recorder going during the birth and I was able to time the events that took place. My daughter was not breathing on her own for a time period of about eight minutes. Now you and I know that even though she is alive today, not breathing for that length of time she would have had brain damage or serious health issues.

I want you to meet my daughter, a healthy beautiful woman, wife and the mother of three beautiful young children of her own.

Our daughter and her husband
Since the time of the twins' birth I've studied the Bible a lot. I have discovered that there is a conflict between two kings and two kingdoms. (Colossians 1:13-14) What do you think a person would need to do to enter God's kingdom? Keep God's law or live the best he can? etc... If that is your answer then tell me, Why did Christ die? The Simple English New Testament states, "If the law could have made us right with God, then Christ died for nothing!" (Galatians 2:21). According to this verse, do you see any other way to heaven except through Jesus Christ? Jesus said... "I am the Way, the Truth, and the Life: no man cometh unto the Father, but by Me." (John 14:6) 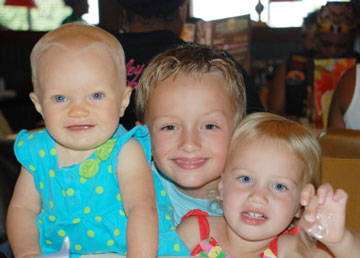 Our three grandchildren
Photo in 2014
Would you consider turning to Him today for the forgiveness of your sins and the newness of life that He offers? (2 Corinthians 5:17) I would like to talk to you about this, because I care about you.